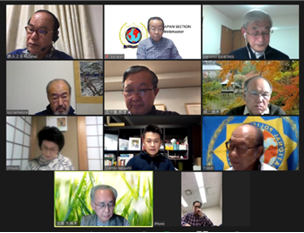 At 8 pm on 7 November 2020, IPA Japan’s Webmaster Mr. Sakai served as the moderator and held a remote meeting for the Executive Board members of Section Japan under the direction of President Mr. Kanetaka.

We normally hold our Board Meetings only in person, because Japan isn’t too big for the board members to get together in one place. However, we had decided to also try a new-style meeting, to avoid the risk of spreading of Covid‑19.

This was the first time a remote meeting was held in our section.

I was little bit worried that there might be technical difficulties concerning all secretaries being able to attend this meeting, but in the preliminary test offered by our Webmaster, all participants were connected, and so, at 20:00 hours, President Kanetaka called each one and we could get started.

The meeting lasted about 50 minutes, each secretary freely spoke on the proposed agenda, as if we had been physically in the same room, and important matters were decided, such as an amendment of the annual membership fee for those working overseas, reimbursements of travel expense for the official meetings, etc.

It felt a little more frustrating than a face-to-face meeting, but we agreed to hold a remote meeting as and when needed in the future, because we now know that this type of meeting can be held efficiently.