I was given a nice, honourable assignment: On behalf of the Presidency of the IPA Hungarian Section and all members of it, I am delighted to greet the members of the large IPA family on the occasion of the 70th anniversary of IPA’s foundation in this online publication. 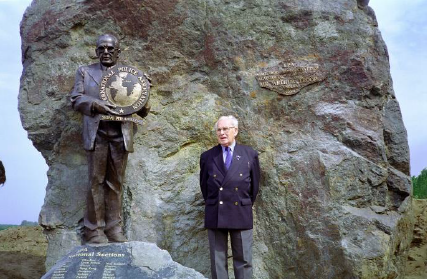 When reading this newsletter, our past, present and future comes to life. 70 years: From a historical perspective, it is not a significant time, but for a human, it is a whole lifespan. In the case of an organisation, an association such as the IPA is already at an adult age, if not offensive, I would say old, but at least experienced, able to show serious results, have a strong past, and a vision of a serious future, in a good sense, a community capable of projecting.

What happened 70 years ago?

Arthur Troop, a Lincolnshire police officer, dared to dream big. He dared to think about “Servo per Amikeco”! He thought that policemen and -women around the world wanted one thing, to provide security and peace to the people who demand it, to the people in need who would count on them. He dared to think that regardless of rank, gender, skin colour, language or religion, a social, cultural, and professional relationship could develop between members of law enforcement. He dared to think that his idea would soon find followers and, with the help of the first pioneers, the organisation he envisioned would become international. And his dream has come true!

If we were to sit around the festive table of our big family, more than nearly 400,000 family members from 68 countries around the world would celebrate together now. Let us close our eyes for a moment and imagine this! A wonderful and soul-lifting image! And from one year to the next, there are more and more of us sitting at this table, in the greatest peace, understanding and friendship…

In 1950, Arthur Troop’s „dream“ came true. 39 years later, first with only a few people, and then more and more, my colleagues became part of this dream.

In 1989, a regime change took place in Hungary. A delegation of seven police officers from my hometown Sopron, a small city on the Austrian-Hungarian border, travelled to the twin city of Sopron, Kempten, in Germany. My colleagues heard about the IPA there first and were soon admitted as associate members. A few months later, several branches of the Austrian IPA Section approached colleagues of Sopron, Vas county, Veszprém and Budapest, whose groups were happy to join IPA as associate members.

At the beginning of December 1990, the Association of IPA Members of Hungary was established. In 1991 at the World Congress in Wellington, the applause was for us, for the Hungarians, the members of the Hungarian IPA, where a decision was made in our favour, but we had also decided amongst us to become members of a group living Inauguration of A.Troop Statue,according to the principles of “Servo per Amikeco”. We are grateful for this sublime experience at the time and for the IPA Austrian Section for being our mentor and smoothing our path during the initial stumbling steps.

We have come a long way since then. We also grew up, and in 2021 we will be 30 years old. Perhaps the most beautiful age in human life. Being an adult, but still having the charm of youth, and having the knowledge and experience acquired at school. We have gained a lot of experience in the last three decades, sometimes with sweat, sometimes with torment, but also with lots and lots of joy, a sense of accomplishment, recognition, and appreciation.

We are proud of creating values that currently only we have among the IPA sections. In 1998, the founder of the IPA visited Hungary. Our presidency at the time invited him to a ceremony, where Arthur Troop was taken by helicopter to a location where he was asked to unveil an IPA statue. The veil fell, and he found himself facing a life-size bronze statue. His eyes did not stay dry either …Two years ago, at the closing chord of the Conference of Central and Eastern European IPA Sections, we were able to inaugurate a new public space on the banks of the river Danube in Ráckeve, named the IPA Promenade.

Dear IPA Friends! As I always say, I believe that the mission of IPA was, is, and will be, as Arthur Troop envisioned …

On behalf of the IPA Hungarian Section, I wish that this mission continues with undiminished faith and with the hope that every year, more members will sit around the imaginary, festive, large IPA-family table.