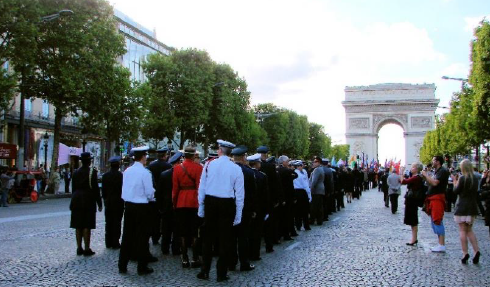 IPA Parade on the most beautiful avenue in the world “Les Champs Elysées”, during the 36th International Executive Congress in Paris, 2010

On this day of Friday 10 September 2010, the sun illuminates the Champs Elysées and the Arc de Triomphe. Everyone has put on their uniform and prepared the flag of their country in order to show that their IPA section is represented in Paris and participates in the prestigious parade of IPA sections, escorted by the mounted brigade, and members of the Paris traffic.

While waiting for the departure of the procession, the colleagues in uniform pose for photos with the Parisian tourists, who are curious and enthusiastic.

When the whistle is blown, the traffic on the Champs Elysées comes to a stop, silence reigns, time stands still, everyone is in place, the music of the Paris Police Prefecture band opens the parade, and they set off, followed by the flag bearers, with their banners blowing in the wind, towards the Arc de Triomphe, which stands proudly in front of us.

The traffic around the Place de l’Etoile roundabout is stopped, and we progress under the flashing lights, surrounded by spectators on both sides, who are surprised and moved to see so many uniformed police officers from 60 countries, united by the common values of friendship, fraternity, equality, and without any distinction of gender, race, or rank, in perfect humanity.

At the Tomb of the Unknown Soldier, under the arch, we pay tribute to all our fallen colleagues by rekindling the flame of remembrance and laying wreaths of flowers.

The authorities and ambassadors are present, and as we are on the eve of the sad anniversary of the attack of 11 September 2001 in New York, we are honoured to be joined by His Excellency the Ambassador of the United States, accompanied by his wife.

Respectfully, we listen first to the national anthems of the USA and France, then to the IPA hymn, performed by the band of the Paris Préfecture de Police.

This emotionally-charged ceremony allows us to reaffirm the friendship that unites us, as well as the fraternity that animates us, and in addition reminds us how important it is to show solidarity in in the difficulties we face in of our profession as police officers.