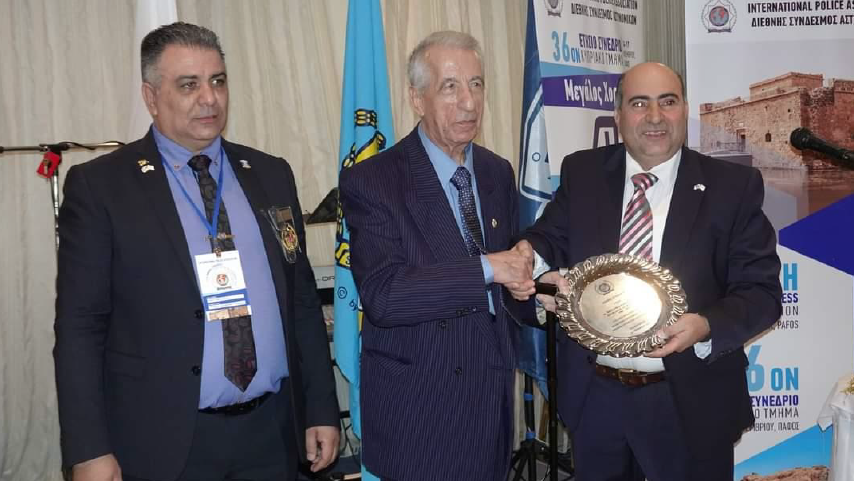 The IPA is today the largest organisation of police officers in the World. We have built together an Association on sound foundations, based on the ideals and vision of our founder Arthur Troop. All of us must feel proud of being members of this great organisation, which our founder had the wisdom to establish 70 years ago.

=As far as Cyprus is concerned, in September 1981, Michael Odysseos was the Commanding Officer of the Port and Marine Police. One day, he noticed a cruise ship entering the Limassol harbour with a large flag hanging on its side. As he saw such a flag for the first time, he approached the ship, and noticed that the flag was bearing a globe with “International Police Association” written on it, and at the bottom the words “SERVO PER AMIKECO”.

Michael Odysseos went on board and was told that the ship had been chartered by a large group of police officers from Austria. He asked for the group leader, who was a high-ranking police officer from Graz, Dr. Hubert Holler, who was introduced as the national IPA President of Austria. Mr. Odysseos invited Dr. Holler with a small group to his office, and was told about the IPA and the ideals of its founder Arthur Troop. 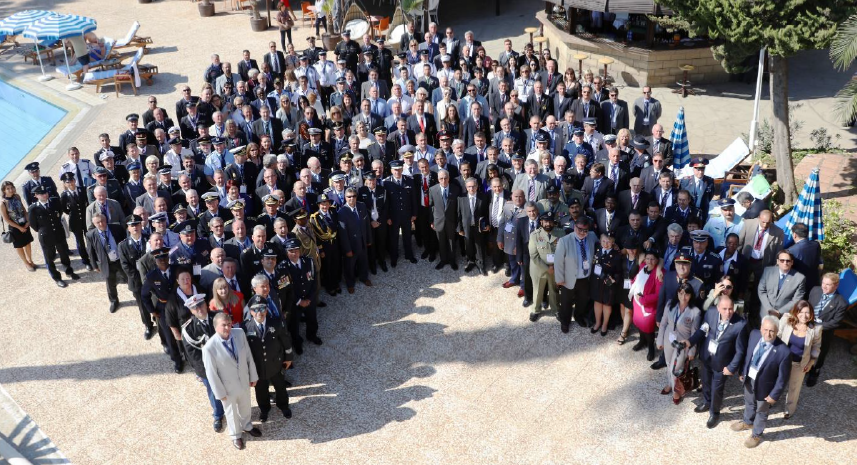 In February 1982, Michael Odysseos visited Austria and Greece, and with their assistance drafted national statutes, and was advised how to proceed in order to establish an IPA Section in Cyprus. In the meantime, new members were enrolled, and six IPA regions were formed (Nicosia, Limassol, Larnaca, Paphos, Famagusta and Morphou).

In September 1982, a Founding Meeting was held in Limassol, and the national statutes were adopted. In addition, a Founding IPA Committee consisting of nine members was elected. Mr Michael Odysseos was elected as Secretary General and IEC Representative of the Cyprus Section. The same year – with the support of the national sections of Greece and Austria – the PEB accepted the application of the Founding Committee, and Cyprus was given the status of Section in Foundation.

In September 1983, at the 19th IEC Conference in Antwerp Belgium, the Cyprus Section was unanimously recognised as a self-governing national section. Today, IPA Cyprus has six regions with approximately 4,500 members (95% serving police officers), is very active in all IPA areas, and participates unfailingly and very actively in all international activities / functions of the Association.
In 1993, IPA Cyprus successfully hosted the 25th IEC Conference in Nicosia, and in 2015, Cyprus was entrusted to host the XXI World Congress in Limassol.

At the beginning of his international career, Michael Odysseos was elected as Internal Auditor. In 1994, the President of the Cyprus Section was elected for two consecutive terms as second International Vice President, and in 2000, at the XVI IPA World Congress in Great Britain, as International President, an office he held for 12 years, and he honoured this position with his active leadership. He was awarded for his services to the Association with the IPA Bronze Medal in 1986, the Silver Medal in 1993, and the Gold Medal in 2012, at the IPA World Congress in Eilat when he voluntarily stood down, and took over as Advisor to the IEC and PEB due to his great experience.

Michael retired in 2019, and his place as President of IPA Cyprus was taken over by Demetris Demetriou. The Cyprus Section continues to be active in the IEB and the IPA commissions with Demetris Demeriou as the Chairperson of the Professional Commission (PC), and with Kyriakos Perikleous as a member of the Socio-Cultural Commission (SCC).

Cyprus will continue to be an active member of the Association for many years to come, in the spirit of the IPA and our motto “Servo Per Amikeco”.

We wish every success to our Association and Happy Birthday on the occasion of the 70th Anniversary of the IPA.

The National Board of IPA Cyprus